Natasha, Pierre, and the Great Comet of 1812: Light Can Emerge from the Dark 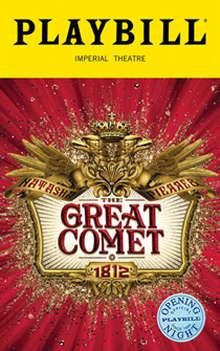 I have to say, I am so surprised by my reaction to this show.

There are so many levels of innovation that I found not only interesting, but truly effective at adding to my overall experience of the story and the setting, rather than serving as gratuitous entertainment (which is often the case with theatrical gimmicks).

For one thing, having seats in the second-to-last row of the mezzanine, I expected to feel the usual chilly stigma associated with the cheapest seats high up in a Broadway house. It’s usually as if I'm more like a fly on a far, distant wall than an audience member who paid real money to enjoy the full experience of the show.

But in The Great Comet, even the nose-bleed seats had a welcoming appeal.

I sat next to a tiny cafe table, and two rows in front of me was a platform where a few performers would bring some of the action right up in front of us low-paying folks (merely $79 a ticket) in the rear mezz.

The walls all over the theater were covered in red velvet curtains with old-school (Russian, I assume?) art hanging on them, and the lighting was a spectacular display of Met-opera style bursting chandeliers and individual hanging light bulbs all over the theater that would move up or down to accentuate certain moments or add add dramatic nuance.

But most innovative of all about the set was the integration of the seating and the stage. 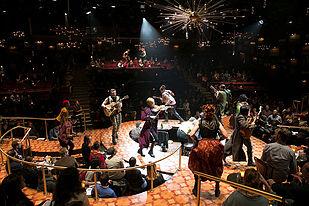 Instead of having a conventional proscenium or stadium or theater-in-the-round type of seating arrangement, the stage consisted more of pathways intertwined with pockets of audience and pockets of musicians, all of whom the performers interacted with in playfully invasive ways.

Regardless of whether the aesthetic or even the story was one's preference, the design elements alone were so inviting, it would be hard not to be drawn in merely by the welcoming atmosphere.

Speaking of the aesthetic, stylistically it's a goth-meets-19th-Century-Russian-aristocracy style, bringing to the surface the more hedonistic elements surrounding Natasha's downfall than any noble sense of Andre's sacrifice or that of the Russian soldiers away at war, as the movie versions tend to bring out more.

For those unfamiliar with the plot of War and Peace (from which this show takes merely a slice), Natasha is a young Russian countess engaged to André who has to leave for a long time (it was unclear to me if it was because he was in the war, or just traveling in this part of the story).

They have a friend, Pierre who is an older scholar, married to an adulteress, afraid of living an insignificant, boring life until his death.

Pierre’s brother-in-law is an irresponsible party-loving ladies’ man, Anatole, who seduces Natasha and convinces her to run away with him in André’s absence.

Unlike in the novel on which the show is based, you could almost forget Russia is even at war except for the constant reminder that “André is not here”, and an allusion to Napolean.

The only contrast to the more hedonistic elements of the show is the standard of righteousness and purity in the three characters who comprise Natasha’s family, and perhaps the moral streak that ultimately prevails in Pierre.

Generally speaking, I'm not a fan of the seduction of hedonism portrayed in any medium. In fact, it's usually an instant turn-off to me. In this case, however, I truly did not feel I was being manipulated merely for the purpose of shock value. Rather, in the wild party scene that precedes Anatole’s attempt to elope with Natasha, I felt an urge myself to get up and dance, the music and dancing was so engaging, and not in a way that made me feel icky.  It was somehow just fun, while still communicating the debauchery of the moment.

One of my favorite moments in the whole show came when Natasha’s godmother Marya stopped Anatole’s efforts to elope with Natasha with a daunting Queen-of-the-Night-esque entrance, declaring, “You wretched scoundrel!”

It is this moment, about halfway through Act 2, when all of the lust and hedonism that had marked most of the whole show leading up to this point came to a screeching halt.

And what a relief it was - young Natasha would be spared a disastrous ending, despite her own stubborn desire to run off with Anatole.

As the plot continues to unwind, while Natasha is spared her one bad decision, she has other problems that ensue.

Just when she has reached rock bottom, now having been rejected by her fiancé André (for having rejected him when she chose Anatole) despite seeking his forgiveness, Pierre visits her.

Seeing her penitent arouses a deep compassion and love for her in his heart, and as he acknowledges it to her, Natasha’s heart is awakened with a spark of renewed hope. The show ends with Pierre singing on his journey home about the great comet of 1812, which seems to be a physical representation of the light that has now turned on in his heart through this newfound love for Natasha.

I found this ending to be refreshingly edifying.

Having Pierre’s heart renewed in the latter season of what had been a dreary existence, and seeing Natasha light up with an awareness that she can be forgiven and seen as pure again despite her downfall caused by her own mischievous decisions, conveyed real hope in a dark place.

The gods of wine, debauchery and hopelessness didn’t win, despite overwhelming odds. 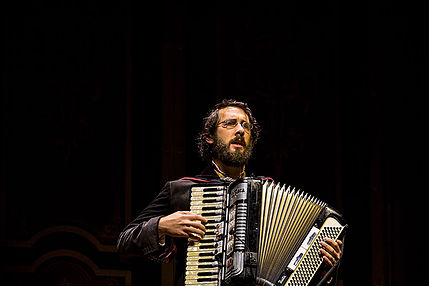