Groundhog Day: Change in the Human Heart, not in Circumstances

I haven't had so much fun at a Broadway show probably since I saw Urinetown in 2003.  The super entertaining nature of this musical reminded me of musicals I’ve gone to just to have a good time of watching some diverting entertainment, like Crazy for You and Anything Goes (but without the tap dancing). 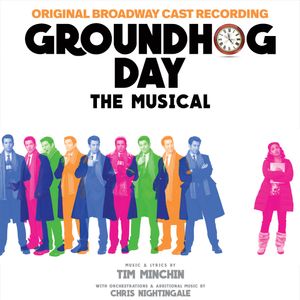 But not only was Groundhog Day a blast to watch, it had a message I love, which made it all the more satisfying. It made me realize that in recent years, when I’ve seen a new musical comedy (comedy meaning, meant-to-make-you-laugh, not the genre of musical comedy), the humor came out of a sense of irony or even mockery. The humor in Groundhog Day reminded me more of comedy in 1980s-1990s movies like Mrs. Doubtfire or Home Alone. I’m sure the fact that it’s based on a movie from that time period has something to do with it. But they could’ve added more grit, irony, or political punches to make it more stylistically contemporary — and I’m so glad they didn’t.

I didn’t realize how much I missed good, clean comedy.

And yet, there was a message in this one that wasn’t only nice, it resonated with me in a surprisingly deep way, without feeling heavy. This is something Rodgers and Hammerstein musicals sort of do, but even with all the comic relief and diverting dance numbers in their classics, the profundity of the story and the message is still very present at all times.

Groundhog Day somehow both diverted and resonated at the same time.

(Spoiler alert - if you don't want the plot given away, read the next part after you've seen the show!)

To try to illustrate what this musical has captured, take the Act 2 opener (well, second song), "Hope" — a dark metal ballad in which the main character sings about having hope that he can eventually kill himself. Where else could such a song be both hilarious and honest at the same time? Even though it sounds dark, the truth was, he couldn’t kill himself because he couldn’t control anything that was happening to him. This is because of the plot concept (in case you didn’t see the 1993 movie), in which the main character, Phil Connors, a TV weatherman from Pittsburgh, is stuck in his worst nightmare — covering Groundhog Day in the podunk town of Punxsutawney. 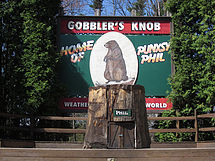 He can’t make it stop. Hence, the eventual attempts at suicide. This is after he has tried other tactics, such as making the most of it by sleeping with whomever and however many women he can in one day; living on the wild side that leads to a riveting and hilariously staged car chase; and pursuing the one thing he really wants — an intimate relationship with his producer, Rita.

What he ultimately learns after playing out this day over and over again, is that he has to face the issues in his own heart before Fate (God?) will allow him to move on in life — and even get what his heart desires.

OK, can we just pause right there?  How did such a fun musical just minister a message to me that applies so deeply to my own life — and probably that of almost everyone I know? I even used this musical as an example when counseling a couple of friends about a serious marital issue.  Usually when I’ve seen comedy in musicals in the past decade or two, it has been at someone else’s expense — whomever is being mocked or parodied. 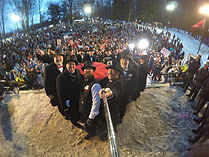 I can enjoy that type of humor, and it has its place. But I have grown so accustomed to musicals, movies, TV shows, protest marches — almost everything I see in the media these days — blaming someone else or their circumstances for all their problems.

I feel like I’ve been waiting for a dynamic character to appear who realizes that he or she is the one who has to change — the kind we learned about in high school English class when studying classic literature.

The message of Groundhog Day is one I can bite into for myself.

Sometimes I need to go through a lesson a few times because it hasn’t gotten through my thick skull of pride or stubbornness yet.

It’s not because of someone else.

It’s not because of circumstances.

It’s not because I’m a victim.

It’s because I need to change.

And I was reminded of all of this while being hilariously entertained for two-and-a-half hours!

Thank you Phil Connors, thank you Danny Rubin, thank you Tim Minchin, and thank you Andy Karl for creating an anti-hero who truly does morph into a hero.

Sometimes, it’s far more impressive for a person to change their own heart than to change their circumstances. And sometimes, such an internal change can be shown in a story that is equally as entertaining as it is edifying. 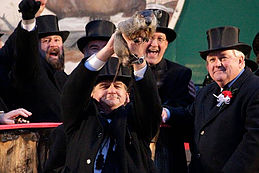