Come from Away: The Wonder of Reality

I’m still a little water-logged from the tears after seeing Come From Away this afternoon.  Despite the fact that everyone has been saying it’s so beautiful, moving, etc., I wasn’t sure it would have the same effect on me.  I was skeptical that a show even peripherally about 9-11 could truly be a feel good show. I thought I would be distracted by the fact that it was 9-11, and so how could I care about the story of some passengers who merely were grounded in a strange place for a few days?  How could whatever drama transpired there compare with what was going on in New York, DC and Pennsylvania?

In the beginning of the musical, I did feel that way just a tinge.  When the passengers were all singing about their 28 hours on a plane as if it were the train to Auschwitz, I wasn’t immediately sympathetic.

I also had trouble connecting with the music right away, as though it was engaging, there wasn't a truly memorable song moment until towards the end.  But the spirit of the show itself soon transcended all my hang-ups about traditional musical theater craft.

The style of the music was folksy, fun, what almost seemed like Newfoundland bluegrass (forgive me if there’s an actual name for this genre).  The kind that can instantly create a party everyone is invited to. And what was created was a party everyone was invited to, but also much more than that.

The main storyline follows the true events that transpired in the town of Gander, Newfoundland on September 11, 2001.  Gander, which lies right next to the Newfoundland airport, has a population of 9,000 people. The air traffic powers-that-be decided that Gander was the place to ground not one or two or ten planes for an emergency landing, but no less than thirty-eight planes carrying about 7,000 human passengers, some dogs and cats, and a pair of rare monkeys.

Come From Away tells the story of the remarkable response of the Gander townsfolk.  People from every corner of the town and surrounding towns spent days and nights making food, gathering supplies, providing showers, clothing, even rooms in their own homes for the "plane people" to sleep in.  It was an astonishing show of generosity at a time when the whole world was struck by shock and horror.

Even knowing ahead of time that this was the story line, I wasn't prepared for the way the musical affected me.

There was a spirit about it that is rare to find in life, as well as musical theater - or anywhere, except maybe the Kingdom of Heaven. 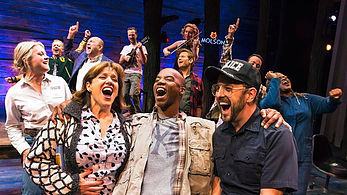 And I say that for a reason. The story was told through a warm directorial style with the actors playing multiple roles, breaking the fourth wall to all share in the role of first-person narrator, which almost made it feel like the real people on whom the story is based were telling the story themselves.

It drew us into a world that was not fiction nor fantasy, as do most musicals that successfully grab our hearts.  This time we were being drawn into an atmosphere based in reality, with real people. Normally that is not the stuff of great musical theater.

But how thrilled and thankful I am that in this case, it was exactly what made the show so satisfying.

The musical effectively captured something that is rare, but real, and maybe ought to be less rare.

There is another side of tragedy that we tend not to focus on.

There is a side where people come together, where they share their grief, where love comes to the surface of our experience in ways we didn't think it could.  I remember experiencing a taste of this a few days after Hurricane Sandy, when I and a team from my church filled a van with needed supplies, and drove to Staten Island to do what we could to help out. 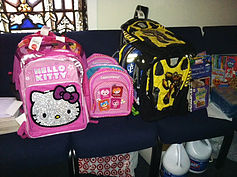 What we experienced there was an astonishing show of love and selflessness that turned an atmosphere of tragedy into an alternative way of living that actually felt more right than wrong.  There was such an excess of donated supplies the authorities had to ask people to please stop sending them.

There were cookouts right out in the open every few blocks, with people giving away food. In fact, even though we went there to serve, the locals kept serving us.

Something happens when we forget ourselves to come together. 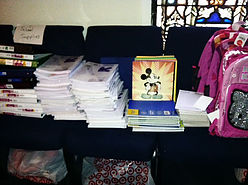 And the best part about it is that this is a way of living that's possible.  I've also experienced it in my church and on missions trips.

It doesn't only need to be in response to tragedy.

I believe we just get so distracted with serving ourselves, we forget that it's more blessed to give than receive.

Come From Away hit on another issue which is one I deal with a lot.  Here is an example of theater that didn't create some fantasy world to which the audience could escape. It presented a state of the human heart that is achievable, even if one believes it's only through tragedy.

Maybe we don't have to escape reality to find our “happy place”.

I'm offering a challenge to the artistic community to maybe find a way to present art that doesn't rely on escapism to provide an edifying and redemptive journey for the audience.

What if we thought of art and entertainment as being able to offer something more real - "inscapism", perhaps? 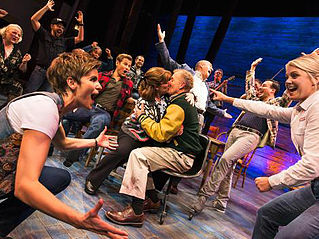 Maybe it can help bring out the wonderful truth that does exist in us and around us. Because what good is theater and music if it only creates an escape to a false reality?

You might forget what's hard about life for a couple of hours, but when the show is over, you have to face it again.

Maybe the arts can help us love life more, not want to run away from it.